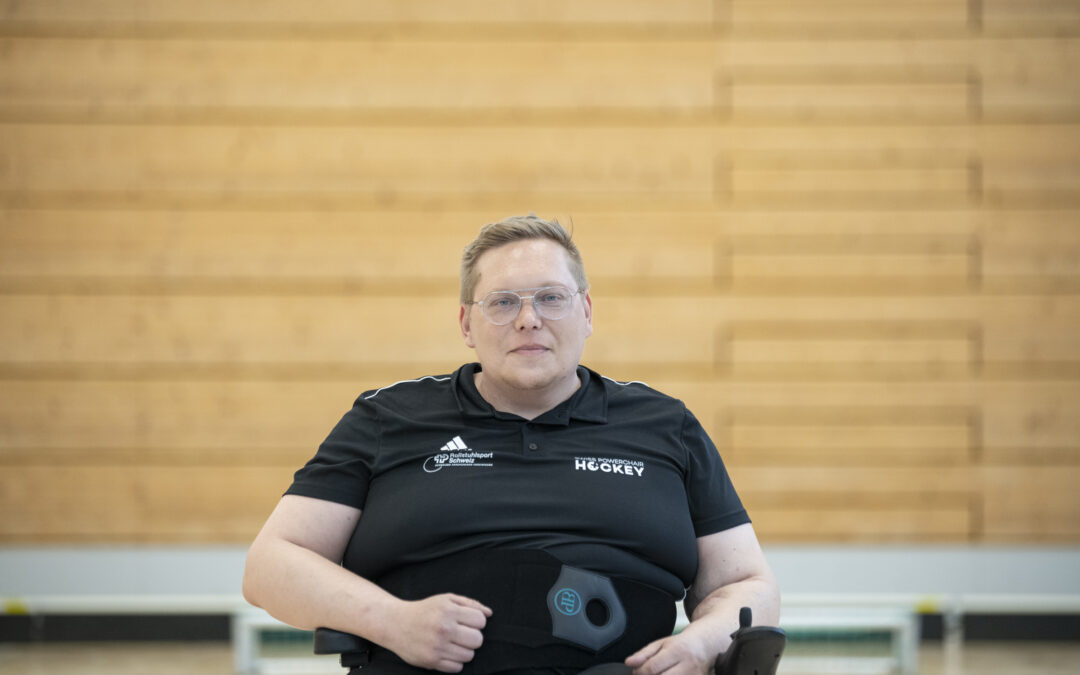 You became World Powerchair Hockey Champion with Germany in 2010. Now you are the team manager and skills coach of the Swiss Powerchair Hockey Team. How did you get this job?
Paul Emmering: After retiring from the German national powerchair hockey team in 2014, I wanted to concentrate on the Bundesliga. The current Swiss national player Veronica Conceição also plays for my club Torpedo Ladenburg (town near Heidelberg, the ed.). Through her, I got in touch with the Swiss Powerchair Hockey Team, which was looking for reinforcement in the coaching staff. I was thrilled by this request. Although Switzerland was «shot down» at the 2010 World Championship, I saw enormous potential for improvement, regardless of the results. Since 2016, I‘ve been happy to use my vast experience to make a small contribution to the upward trend.

What is your task in the Swiss national team?
Before the World Championship, I put together an individual training programme as a skills coach. In Corona times, I sent the players technique exercises via Whats-App. They received various tasks and exercises with the ball that they were supposed to master. The players then sent me videos of their training sessions. This allowed me to make corrections to their playing behaviour, driving routes and court positions. During the competition, I will hold the position of team manager. I will take part in various meetings and relieve the players and the coaching staff of organisational work so that they can concentrate fully on the sporting competition.

On 9 August 2022, the Powerchair Hockey World Championship will begin in Switzerland. How are you feeling before the beginning of the competition starting against the reigning world champions Italy in the Stadthalle Sursee?
The excitement is slowly building. I‘m really excited that the Swiss public will be able to enjoy a home World Championship. I know from my own experience that it will be a great experience. As a German, I have fond memories of the 2014 World Championships in Munich. Not only the spectators in the hall supported us, but also friends and acquaintances. The opener against the reigning world champions Italy will be a special match. It is not only the opening game, but also one of the most important games of the group stage for both teams, as the winner will have an excellent starting position for a place in the World Championship semi-finals. As world champions, Italy are easy favourites. However, the Italians have a new coach and some new players who still have to prove themselves.

You were World Champion in 2010 with Germany and scored the golden goal in the final against the Netherlands in the 5th minute of extra time. Will you show the Swiss players in Sursee how they can perform like world champions?
(smiles) I will try. There is no miracle cure. Powerchair hockey has changed a lot since I won the World Championship in 2010. What has remained the same, however, are the virtues it takes to achieve a great goal: concentration on the essentials; the necessary looseness not to tense up; and trust in your teammates.

What makes your team stand out?
The Swiss team has enormous potential, a very good team spirit and is hungry for success. We want to win a World Championship‘s medal for the first time.

Who is the most dangerous opponent on the way to the title?
The Netherlands – the motherland of powerchair hockey.

How do you explain the superiority of the Dutch?
The Dutch league is the best in the world. The technical level there is incredibly high. Since the 1970s, the Dutch have placed great emphasis on this area. Every pass they make is on target, every shot they take is on goal. In training, many ideas have been adopted and adapted from field hockey. This Olympic sport is extremely popular in the Netherlands. The Kingdom is one of the most successful hockey nations in the world. In the 2003/2004 season, I myself once played for the GP Bulls Eindhoven in the Dutch league and was able to see for myself.

Why is it worthwhile to be there live at the World Championship in Sursee in August?
The spectators will experience a unique atmosphere as well as fair and exciting competitions. Possibly with Switzerland as the main protagonist. We are going to the World Championship with high goals and don‘t want to finish sixth. With the necessary luck in the competitions, we can make it big. With the introduction of the 2016 classification system (the impact of the different impairments on the ability of players to perform the main sport specific activities of PCH is taken into account. Classification is from 0.5 to 4.5 points. There can be a maximum of 12 points on the field, the ed.) the world‘s top has moved closer together. The Netherlands have lost the aura of the sheer superior opponent because they are no longer allowed to field numerous 4.5-point players at the same time. There is a circle of favourites of four to five teams, but with certainty no one can seriously predict who will ultimately win the title.