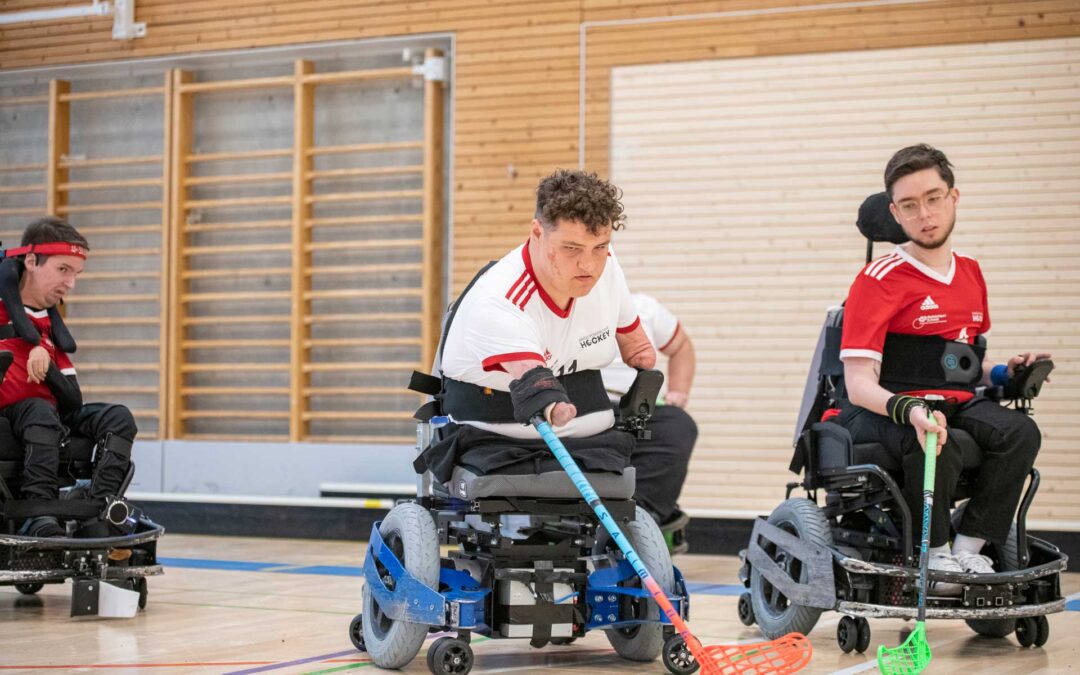 World Championship Concept
Normally 8 teams qualify for the World Championship. The qualification system is structured to allow 1 team per region of the world to be represented and follows the World Ranking List. The 2022 World Championship is a special edition because due to Covid-19 the Regional Championship (European Championship) was cancelled. Because of this, 10 teams will compete for the first time divided in 2 groups. Group matches will be the first step, then playoffs and semifinal will decide who will play to win the trophy.

Team line-up
The game is played 5 against 5 – 1 goalkeeper and 4 field players. Players with a higher functionality on the upper arms can choose to play with a hand-stick (ordinary floorball stick) while players with more severe impairment usually plays with T-Stick (a T shaped blade attached to the front of the powerchair).

Classification
As in all the Para sports also in Powerchair Hockey there is a classification system in place to ensure a fair competition. Classification aims to assess the impact the impairment has on the ability of the athletes to perform sport specific activities. Each players undergoes a physical and a technical assessment and is observed on court by licenced IPCH Classifiers. Each athlete is assigned a sport Class from 0,5 to 4,5, more severe impairments get lower points. Each team can play with max. 12 points on the field.

Playing field
Just like floorball, the game is played on a field with boundaries consisting of 20 cm high boards. The field measures 26 metres in length and 16 metres in width. The field is divided in two halves, and the last 7,5 meters is called the Penalty area where an offence can lead to a penalty shot. In each half there is also a semi-circular goal area where only the goalkeeper is allowed to enter and play the ball.

Goal
The goal is 2.5 metres wide and 20 centimetres high.

Playing time
A match is played in two halves of 20 minutes effective time. Teams are entitled 1 time out per half. Two IPCH licenced referees officiate the match and are observed by licenced Referee observers during the games. Jury Members makes sure the competition runs smoothly by supervising the match table.

Powerchairs
Powerchairs must not travel faster than 15 km/h, a speed control system is in place to check the equipment are legal. Powerchairs are quite heavy their weight is about 100 kg, but they are also very powerful, fast, and reactive. They are operated through a joystick.  The sport chairs can be very expensive and reach a cost of 20.000 euros.

Powerchair Hockey in Switzerland
Powerchair Hockey within Switzerland is organised under the patronage of the Swiss Paraplegic Association (SPV) based in Nottwil. There are approx. 140 athletes in Switzerland involved in Powerchair Hockey clubs in the cantons of Aargau, Bern, Basel, Vaud, Lucerne, St. Gallen and Zurich. Both men and women play in mixed teams, with no age limits. People with severe and progressive disabilities are the main target group of athletes and represent the 80% of the athletes on the international level. Nowadays Powerchair Hockey represent a chance for being involved in a team sport for many people with severe physical impairments. The Swiss national team has been active since 2008. It has now participated in over five official IPCH competition including several European or World Championships.

The international movement
IPCH stands for IWAS Powerchair Hockey. It is the international committee for Powerchair Sport. It is entirely run by volunteers. Every 4 years Nations elects a Sport Executive Committee in charge of running the movement and organize the competitions. In addition to the SEC members IPCH can count on the commitment of many volunteers joining subcommittees or special projects groups.